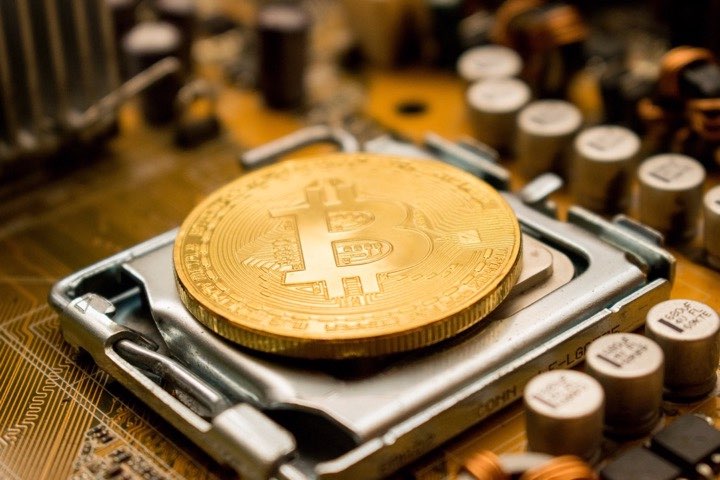 Bitcoin mining is the process through which new Bitcoin is created and existing Bitcoin transactions are validated.

Whenever you make a transaction in Bitcoin, you send or receive Bitcoin on the Bitcoin blockchain. If you need a refresher on blockchain technology, do check out the Blockchain Technology 101 article.

Now with fiat currency, your transactions go through banks, right? Banks act as intermediaries, so whether you use cards or an ACH transfer the bank charges you for the transaction. With Bitcoin, there is no intermediary bank. Instead, you have Bitcoin miners with specialized computers that mine (process) the transactions.

When you make a Bitcoin transaction, it’s sent to the Bitcoin network to get verified. It’s unverified at this point because all that’s happened so far is a request.

Each miner runs a node (think a single accountant). Many nodes maintain and verify records of all transactions on the blockchain. As long as 51% or more of the nodes verify the transaction, it’s added onto the blockchain. That transaction can’t be reversed now.

All that information is publicly available on the Bitcoin network for anyone to check too. Imagine if you asked your bank to see their transactions…

Since this requires a lot of work on the part of miners, they’re rewarded with a Bitcoin block reward. Verifying each block requires miners to answer complex mathematical equations, which requires heavy computing resources. The block reward also halves every 210,000 blocks, approximately four years.

This covers the reward, but what about the actual mining? What makes it so difficult and costly?

How Does Bitcoin Mining Work?

Each hash is an opportunity at solving the math problem, so miners are constantly upgrading their hardware in order to create more hashing power. The more hashes that the hardware can produce in a second, the better the chances of getting it right and earning the reward.

This is why mining hardware needs to be quite sophisticated. It’s also why Bitcoin and other cryptocurrency increases in value as the hashing power for various cryptocurrency mining increases.

In the early days when Bitcoin was introduced, mining could be done on your average desktop PC with just the mining software. But over time, the mining difficulty has increased as more and more miners have appeared to try and win the rewards. The system is designed to get more complex and difficult as more miners enter into it and similarly if the number of miners decreases, the difficulty will decrease.

What Hardware is Needed to Mine?

Mining methods and costs have gone up significantly since the first block was mined in 2009. As I mentioned, in the beginning, you could mine Bitcoins using your desktop PC at home, but as competition increased it became more and more difficult because the mathematical problems became more complex.

An average CPU can spit out 10 MH/s (millions of hashes per second) of hashing power. That’s nothing compared to what dedicated mining hardware has achieved today. However, back in the day, this was the best that technology offered. Over time, tech experts realized that they could take the hash rate significantly up by using GPUs (Graphics Processing Unit). A high-end graphics card can take your CPU’s hash rate up to almost 800 MH/s.

That led to the creation of dedicated GPU mining rigs (hardware setups) fitted with high-end GPUs that could also be used as gaming machines. The issue with graphics cards is that they require a bit more power and produce significantly more heat. Due to the heat, you’ll also need to invest in a cooling system for your setup.

What Are the Costs of Mining Bitcoin?

CPU mining is almost obsolete now because the level of competition in the market is so high that CPU miners can wait for decades to mine a fraction of a bitcoin. As a result, miners need more sophisticated hardware to be able to mine cryptocurrency.

The next step in hardware technology after GPUs was the Field Programmable Gate Array (FPGA). An FPGA could provide the same power as a GPU while consuming only a fraction of electricity. If a high-end graphics card consumes 400 Watts, then a FPGA chip consumes only 80 Watts roughly. This didn’t add a lot of hashing power, but it did reduce the cost of mining by ~80%.

In their search for unparalleled mining power, hardware experts developed the next iteration, the Application-Specific Integrated Circuit (ASIC). It’s a dedicated microchip for bitcoin mining. These chips are expensive, but they deliver incredible speed and power.

Bitmain is one of the largest providers of ASICs and they sell their Antminers on Amazon. You can see what they sell here. Antminers can range from less than $100 to over $1500, all depending on how much hash power you’re looking for. This is an example of one of the latest ones they sell:

Due to costs per individual miner, miners will also look to join a mining pool. Mining pools allow miners to pool their hashing power together for better chances at winning cryptocurrency rewards.

The more money you invest, the more hash power you’ll get, and the better your chances will be of earning rewards. If you are all excited after reading this and want to go and get a high-end GPU or ASIC then might want to wait.

As the number of miners increases, mining only gets more difficult. The value of Bitcoin is hovering around $9000, and your rig and electricity may end up costing you $8000 to $15000 in the early days. The interest in mining at this point is so great that individual miners like you and I don’t stand a chance against industrial mining farms.

There is however a saner alternative and that is called cloud mining.

What is Cloud Mining?

Cloud mining simply refers to the process of mining Bitcoin through an online company, without having to invest in costly and space-consuming equipment that will only grow obsolete over time. With cloud mining, you can be situated in any part of the world and you can simply open up an account with any of the reputable and verified cloud mining firms to buy hashing power.

Similar to one miner joining a mining pool, cloud mining firms form a mining pool that users anywhere in the world can join. Each miner in the pool contributes towards buying the mining power or hash rate for the system and in the end, the rewards from the mining are shared between all the miners in the pool.

Each user purchases the amount of hashing power that they want to have and the rewards are distributed proportionally based on the total hashing power purchased from everyone. There’s no hardware that’s needed for each person to purchase.

Cloud mining is gaining traction quite fast in the market because it has opened up mining to people in areas where they can’t get access to mining equipment. Mining by yourself requires a fair amount of technical knowledge as well. Cloud mining eliminates the need for any prior knowledge as well. You simply need to have money to invest in the system and you can become a cloud miner without having to deal with the hardware setup.

Cloud mining sounds great with just buying hashing power. No need to purchase hardware, nor do you need any expert technical knowledge to set up your own mining rig. As with anything, it still requires caution.

Don’t blindly trust any companies because there have been a few scams as well where companies like HashOcean and Bitcoin Cloud Services scammed unsuspecting customers. Caution must be exercised at the time of looking for cloud mining platforms because it is very easy to be deceived.

Only invest with a platform that you trust because you will not be able to ascertain whether the platform really has the mining equipment or if they’re running a pyramid scheme, as what happened with the two companies mentioned above. Be sure to do your research and due diligence.

Now let us have a look at some of the trusted cloud mining platforms that are in the market right now.

Cloud Mining Platforms to Mine Bitcoin

There are a few established cloud Bitcoin mining companies out there. None of these are recommendations as much as it is a list to get you started in doing your own research. I won’t go into prices, because prices change all the time based on their electricity costs and Bitcoin and other cryptocurrency prices.

Provides fast low fee crypto mining. The site claims to have over 5 million users with almost 80% return users and over 100 bitcoin output per day. Bitdeer is associated with Bitmain, so they have access to and use Antminers.

Prices per month go up according to the hash power and length of the contract. Apart from this they also have 130-day and 360-day plans.

I’ve used Bitdeer before and I had a great experience with using their services when they first started services in 2019. But the costs weren’t worth it because of Bitcoin’s price back then. Read my Bitdeer review and how I calculated whether cloud mining was worth it or not.

Genesis has a data center in Iceland. Their bitcoin mining plans are in 6 or 30-month runtimes. As of this article, you can only select 30 months.

Bitcoin.com is well-known in the crypto industry. With that name comes a premium. You’ll notice that their prices are higher than everyone else’s. Their plans are usually sold-out or they’re just not offering.

Crypto Mining is another company that provides cloud mining services with 48-month plans.

There you go, the basics of mining 101. The foundational elements of mining are true for a cryptocurrency that utilizes proof of work algorithms.

In the end, it all comes down to how much money you have for investment. If you can invest more, then you can expect a greater reward. The rule therefore is simple. Whether you’re mining cryptocurrency on your own or cloud mining, you need to invest quite a sum of money to get a substantial reward.

With self mining, however, you’ll probably need to invest around $10,000 to $15,000 to get a decent rig up and running to be able to get any rewards. You’re up against mining farms that run on economies of scale, so if you factor this in, then cloud mining remains as the only sensible and feasible choice if you want to do any mining.

The cost advantage alone is enough to convince anyone that if you want to earn money through mining, then cloud mining is the best option available right now because you save on the hardware used to mine, your own electricity costs (running the rigs and cooling the rigs), and have a better chance of earning a profit.

If you just want to have some Bitcoin or another cryptocurrency, you can buy Bitcoin on Binance with a credit card. That’s probably the easiest way to obtain exposure to cryptocurrency if that’s all you’re looking for.